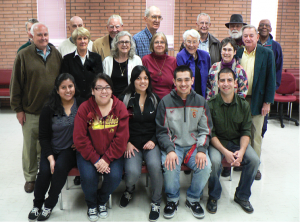 This program was initiated by the late Professor Russell Caldwell, a former RFA president, who resided in the neighborhood surrounding the USC campus. The program was designed to strengthen USC’s community relations by offering scholarships to deserving students from nearby high schools. The RFA became the sponsor of this program after Professor Caldwell’s death in 1979.

The program offers limited (but growing) financial support for Caldwell Scholars. If you would like to help build scholarship funds for our scholars, please go to: ignite.usc.edu/project

The RFA offers a supportive community for these Scholars. During the academic year, the RFA Board invites the Scholars to two luncheons: the first (in the fall) to encourage interaction among fellow Scholars and Board members; the second (in the spring) to honor Caldwell Scholar graduates and to encourage these graduates to share stories about their experiences at USC.

Mousael Rosa Louis: A senior majoring in Psychology with a minor in Non- profit Organizational Structure, Philanthropy and Volunteerism, Mousael spent her 2018 summer as a counselor for 8 to10 year-olds at USC Trojan Kids Camp. She returned to her alma mater, Dorsey High School, to help juniors and seniors work on their college applications. She was also a volunteer panelist and mentor for a USC Emeriti Center/Dorsey HS “Get College Ready” joint project designed to help Dorsey HS Class of 2019 students develop their personal college admissions essays and explore the university experience with USC faculty/staff retiree mentors. Mousael joins the ranks of Trojan Family alums next May with her USC Class of 2019

Carlos Marin: A senior looking forward to his May 2019 USC graduation, Carlos majors in Astronautical Engineering. He is currently working as a researcher supporting projects from the Air Force Research Lab at Edwards Air Force Base (AFB). He spent the summer at the Air Force Lab studying the development of Rotation Detonation Engines. He still mentors and teaches AP calculus at his alma mater, Jefferson High School. After graduation, Carlos plans to work or attend graduate school.

Lili Apreza: An English major with goals to become a foreign language teacher, Brenda is attending a Korean Language Study Abroad Program at Yonsei University in Seoul, South Korea for the 2018-2019 academic year. For the 2017- 2018 school year, she made Dean’s List and was awarded a FLAS (Foreign Language and Area Studies) Scholarship. She’s worked for the USC Upward Bound Program since entering USC in 2016 and also works at the campus Japanese Center. Brenda plays tenor and alto saxophone, teaches music to middle and high school students. She graduates USC in 2020

Mariela Cardenas: A junior majoring in English with an emphasis on creative writing and a minor in film. Mariela was a Dean’s List honoree for the 2017-2018 academic year. During the summer, she worked at the Pullias Center for Education in the USC Rossier School of Education as part of the Undergraduate Research Assistance Program (URAP) which, she said, “…improved my skills in data statistics and WordPress.” Mariela continues mentoring at her alma mater, Belmont High School, helping seniors apply to college.

Esmeralda Catalina Leon: A sophomore majoring in Aerospace Engineering, Esmeralda spent her summer studying physics at California State University, L.A. This year she will serve as Ambassador for the Center for Engineering Diversity Mentor Program advising high school students in transition to college. She is also involved with the Society of Hispanic Professional Engineer’s Outreach Committee to encourage young students to pursue careers in STEM. Esmeralda is a member of USC’s Math Engineering Science Achievement Program.

Carlos A. Fajardo: A sophomore, Carlos came to USC from Manual Arts Senior High School – College Preparatory Magnet with high honors. He majors in Biological Sciences/PreMed with a Biotechnology minor. He works in USC’s Upward Bound Program tutoring high school students in math, English and history and works in the USC Bookstore. He is bilingual and proficient in several computer operating systems. Carlos plans to attend medical school after his 2021 USC graduation and work for a government agency.

Briana Lizbeth Chavez Ramos: Briana hails from Manual Arts Senior High School where she was on the principal’s honor roll for 4 years and the Valedictorian of her 2018 graduating class. Her academic and extracurricular honors include the Gold Seal for Biliteracy, Certificate of Achievement for Outstanding Leadership Skills, Top Speaker & Championship Award in Novice League Debate at USC’s Tournament in New Designs at the L.A. Metropolitan Debate League, Associated Student Body & Senior Class President and a member of H.O.P.E. (Help Other People Everyday) Club. She spent her summer in USC’s Bridge Program. Briana plans to major in Political Science at USC and become a lawyer.

Nicky Isai Lopez: Nicky graduated Manual Arts Senior High as Magnet Valedictorian for his Class of 2018. He was active in Manual Arts Youth Empowerment Through Action (MAYEA), Manual Arts Beyond Borders (MABB), H.O.P.E. Club (Helping Other People Everyday), USC’s I AM Mentoring Program, USC STEM Center for the Innovated and Excellence, USC TRIO ETS and Christian oriented activities. His academic awards include California State University L. A. certificates for college-level quantitative statistics courses, GPA high honors, perfect attendance and certification in financial literacy. He draws cartoons, reads books, has a deep passion for video games and loves to practice coding on websites such as Khan Academy and Code academy. Nicky plans a future as a video game developer and majors in Computer Science at his “dream school,” USC.

Text the word “Emeriti” to 41444 on your cell phone to make a pledge. You will receive a text that gives you a link to DONATE.

For additional information contact the USC Emeriti Center at emeriti@usc.edu.

View retiree privileges including information about the Gold Card.

Read about others’ post-retirement activities

Use this application to send us your bio.

All past Zoom sessions are recorded and can be viewed here!